Let me tell you about the crossroad.

The Bridleway is only a track, but it leads into a wagon trail and a cobbled street which leads to the city. It’s the way the riders take when they raid the hamlets in the hinterlands, hamlets like mine, for men, maidens or dues.

The Footpath is the way we take when the riders come. It leads into the woods, and we never know if we’ll come back, but they can’t follow us there.

The way south is the Limepath, because that’s where it ends. Beneath the ancient lime tree, we celebrate and mourn, we hold judgment, we take counsel. It’s the centre of our lives.

The stairs have no name. Only the graveyard lies behind the hill, the graveyard and the derelict crypt. No one goes there, not since that night when the miller’s wife buried her unnamed child there.

It took the priest as he tried to cleanse the place. Sometimes, at night, we can hear them, and we’ve taken to burn our dead.

Is it weird when a photo reminds me of a scenery encountered in a computer game? Because that’s what happened here – the prompt seems like taken directly out of the game The Witcher 3, up to the signpost and the foxgloves (and let’s just take it as a compliment to the sheer incredibleness of today’s graphic engines and the love of detail of the developers). Anyway, my little tidbit of the week is heavily inspired by the incredible lore of The Witcher novel- and game-series. 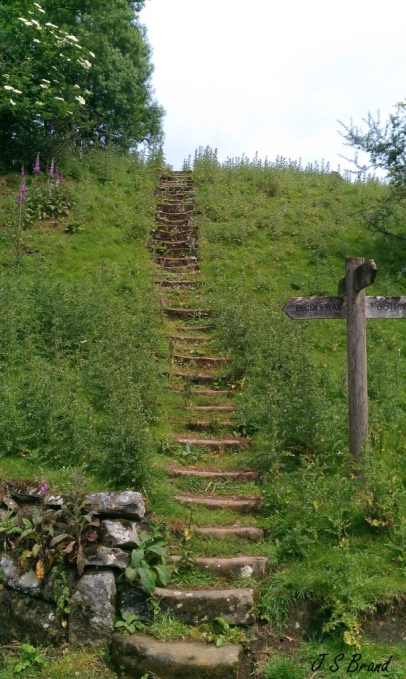 3 thoughts on “The Crossroad”